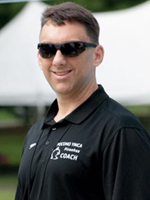 1996 graduate of East Stroudsburg University with a Bachelor of Arts degree in Sociology/Anthropology. He has coached the Pocono Piranhas since the summer of 1990, starting as an assistant coach at the age 18. In the fall of 1991, he took over as Boys Head Coach until 1997 when he was appointed Head Coach of the Piranhas program. Since 1991 the team has grown from 60 members to over 130 strong with both boys and girls teams earning league, District and State titles. He is Certified in Principles of YMCA Swimming and Diving, YMCA Swim Coaching, American Red Cross First Aid and CPR, holds certification as a USA Swimming Coach, YMCA Swim Official, American Red Cross First Aid & CPR Instructor, and is member of and certified by the American Swim Coaches Association . He has over 30 years of coaching experience and 6 years competitive swimming experience. Since 1990 he has coached the Piranhas to 92 League titles, 28 YMCA District Champions, 13 YMCA State Champions, over 50 YMCA National Qualifiers, 54 YMCA Top 16/10 in the Nation Ranked Swims, 5 YMCA All Americans, 1 USA Swimming Scholastic All American, 3 Middle Atlantic Junior Olympic Open Age Group Championship Teams, 3 Middle Atlantic Junior Olympic High Point Winners, 2 YMCA National Champions, 2 Zone Select Camp Selections, 1 2 Eastern Zone Champions and a USA Swimming Disabled World Record Holder (Onel Ramirez JR) in the 200 Meter Freestyle. He was also selected to be the 2011 (13-14 Boys & Girls), the 2012 (11-12 Girls) Middle Atlantic All Star Zone Coach. The 2012 summer long course 11-12 girls were 1st place as well as the LSC was 1st place.

Mike's swimming career began his freshman year at East Stroudsburg High School where he qualified for PIAA Districts and held several team records with the Cavaliers. During his last 2 years of high school he also swam with the Pocono Family YMCA Piranhas where he qualified for YMCA Districts. He continued to swim in college at East Stroudsburg University until the team was disbanded in 1990.

Swimming is a family affair for Mike. He has three children, Emily, Zack, and Sydney are members of the Piranhas. His wife, Sonia, is the team's Parent Coordinator and Team Representative for the YMCA Penn Del Swim League. Mike resides in East Stroudsburg where he is an active community member and holds seats on local advisory boards. 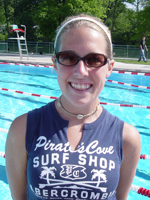 2003 Graduate of Pocono Mountain East High School. Erika is a Piranha alumni who was part of the team for over 10 years. Erika’s swimming accomplishments include attending YMCA Districts and YMCA States, Qualifying for YMCA Long Course Nationals, Attending USA Junior Olympics, High School Districts and setting many records for the Piranhas as well as for her high school team. Erika has was a swim lesson instructor for over 7 years at Dansbury Park in East Stroudsburg. She has over 16 years of coaching and over 11 years competitive swimming experience.

Erika is a certified Certified in Principles of YMCA Swimming and Diving, YMCA Swim Coaching and is also a USA Swimming Coach. 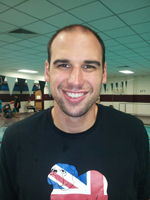 B.J. began swimming with the Piranhas at the age of four and has been a part of the team as either a swimmer or coach since then, giving him over 25 years of experience in the world of swimming. During his time with the Piranhas, he set multiple team records, won District, State and Junior Olympic titles, and qualified for Short and Long Course YMCA Nationals. He also garnered Top 16 times in multiple years.

B.J. also swam for Stroudsburg High School, setting school records and earning Conference Swimmer of the Year for three straight years. He competed in Districts all four years and qualified for PIAA States his senior year and helped his team win two conference championships. He graduated in 2005 as the class salutatorian. He has been an assistant coach for his alma mater since the 2011-12 school year.

B.J. is a graduate of the University of Pittsburgh School of Pharmacy, earning his Doctor of Pharmacy degree. He was also a 4 year member of Pitt's Swimming and Diving team, qualifying for Big East Championships all 4 years. During his tenure at Pitt, he also coached the club team Team Pittsburgh for 2 years.

Ever since he began coaching with the Piranhas in May 2006, B.J. has gotten the chance to see the other side of swimming. He enjoys coaching because he is able to give back to the team that got him started in the sport. When he is not coaching, B.J. is a pharmacy manager for a local CVS Pharmacy and also enjoys being a member at Stroud Crossfit. 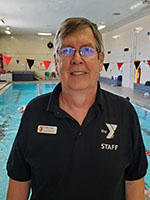 Hi, My name is Chris Trigg, and I have been involved in Aquatics for 55 years.I started my aquatic experience as a competitive swimmer in my youth and through college. I ended my competitive swimming when I was injured, which allowed me to share my swimming experiences with youth and adults by coaching swim teams and teaching swim lessons. I have been coaching and teaching swimming now for the past 46 years For 45 years I have been teaching swim lessons and coaching swimming on the East Coast at various YMCAs, Summer Camps (Resident and Day), and private lessons. My coaching experience includes the U.S. Masters Swim Team for 20 years, and at Asphalt Green Aquatic Center in New York City. I was the Assistant Coach to the Jersey Gators Swim Team of New Jersey. I have also been Aquatic Directors for several recreational aquatic facilities.

I have coached many aquatic athletes that have competed at the college level and moved to the next level to compete in the National Championships and Olympic Level.

I find teaching swimming to the young and old very rewarding and I could not think of any other career I would rather have. The fact that I teach life long skills to help prevent drownings and have life time aquatic fun is my goal for my students.

I am a 2016 graduate from Pocono Mountain West High School. I started swimming for the Pocono Farms Country Club Swim Team at the age of 4. I was also a member of the Piranhas for about 5 years. I attended YMCA Districts several times. I swam all 4 years in high school. I competed at Districts every year and was named Girls’ Captain my senior year.

I started assisting the coaches for the Pocono Farms Swim Team at 13. I have given swim lessons to children of all ages and assisted many with special needs. I’ve been a coach for the Pocono Family YMCA since 2017. I love coaching because I love seeing the swimmers get excited about doing great things inside and outside of the pool.

Carissa spent six years swimming USA Swimming with the Mountaineer Aquatic Club in Morgantown, WV and one year YMCA Swimming when the team briefly joined with the Mid Ohio Valley YMCA. She attended WV Long and Short Course WV State Championships. After graduating high school, she helped coach the Morgantown Aquatics Sharks summer league team. After moving to Stroudsburg, her daughter joined the team while Carissa officiated meets as a YMCA Level 2 official. The next year, Carissa became a member of the PFY coaching staff. She is certified in Principles of YMCA Swimming and Diving, YMCA Swim Coaching and is also a USA Swimming Coach. Carissa also teaches Pre-K and private lessons at the YMCA, instructs the Water Aerobics class, teaches beginner and intermediate fencing, and is President of the YMCA Safety Committee. Carissa is a resisted Master’s Swimmer and competed in her first Masters meet in May 2019. She also participates in Pocono Family YMCA’s 100 mile swim club and is looking to start open swimming in spring of 2020.